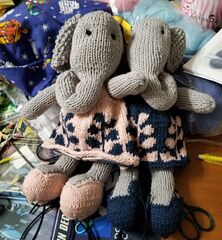 Elephants knit by a guild member
A Brief History of the Founding of the Guild
The Handknitter’s Guild of North Central Texas had its organizational meeting April 12, 1984, at the Main Library in Arlington, Texas. There were 22 interested persons in attendance.

Those in attendance each contributed 25 cents to cover mailing costs. Temporary committees were formed to conduct the business for a few months until by-laws could be written and a formal slate of officers could be proposed. There was a brief program presented by Anne Bloom who modeled her rag top and matching rag skirt.

The next meeting was held at the First United Methodist Church, Arlington, May 17, 1984. The Guild met the second Thursday of each month at the church. The business of an organized guild became more firm with many volunteers pitching in to help and take over the various positions and activities involved. Each person contributed $1.00 for expenses.

The first workshop was scheduled for September 15, 1984, but was cancelled due to insufficient interest; however, the Guild was not discouraged and more and more plans were implemented and finalized. The first group of preemie caps was presented to a representative of Arlington Memorial Hospital.

The first style show was presented at Forum 303 Mall in November 1984. The first patterns were included in the November 1984 newsletter and the first tips for better knitting also appeared, setting the content and style for future newsletters.

By December 1984, things were pretty well in hand. Ideas and suggestions were being offered and acted upon and the Guild seemed real. Community projects were put into place.

The first workshop was held in April 1985. This feature has been part of the years’ programs ever since.